I am an musician and artist.  My musical mainstays are Blues, Rock, and Country, Between the three I stay fairly busy recording and playing live performances. I have been playing since the 60's so I have had a rather lengthy career.
As an artist I seem to be mostly into FANTASY ART with side trips into MOOD and SURREAL ART. I use POSER, VUE, BRYCE, and CARARRA. Photoshop is my tool of choice as a post production tool, and rarely do any of my pieces escape from Photoshop untouched.  Mixed media works intrigue and challenge me. I love to see pieces come together.

I want to thank 'brain1969' for his awesome 'just4renders - FLOOR 2. ' With its wonderful geometric construction, its easy to use camera presets, and its included hrdi maps for the outside environment, it is the perfect setting for me to use for this remembrance of a time long ago. That remembrance from long ago is now set in a very modern surrounding.

So I now offer you Gloria..

"Gloria" is a song that was written by Northern Irish singer-songwriter Van Morrison, and originally recorded by Morrison's band 'Them' in 1964 The song became a rock staple and a part of many garage bands' repertoires. When I was about 14 years old, I joined my first band. We were as lousy as all get out, but we had attitude. We played parties and Junior High school dances mostly. On occasion we worked in dumpy teen dance clubs. Even though we were to young to do it legally, we got hired because we worked really cheap.

That was where I met my first older woman. At 16 years old, she was so very worldly to a 14 year old boy like me. And ... she was a Junior at a local High School. She taught me the fine art of making out behind the gym. So, wherever she is today, she will always be my 'Gloria.'

Thanks for your views and comments. They really mean a lot to me. You all have been so very kind to me and you all are very special to me.

Be Well and Stay Safe ...Dag

I love the contrast between the silver walkway and her dark legs--she looks both predatory and magnificent. I like having her face hidden, too!

This is fantastic work!

Excellent render and a great story to go along with! It's so nice that you can reminiscence about moments in your life, through your art! Well done! :-)

Wow !! A superb quality, so realistic, it looks like a photo, congratulations, it's very nice work

There she was just walking down the street.

Great use of the perspective, well done image !

Her name is G.L.O.R.I.A...wonderful song and wonderful tribute. 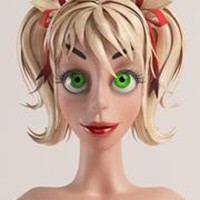 Wonderful scene and render and an excellent choice for the POV

I'm one of those guys that played the living daylights out of that song...

superb use of his model of the people movers at Love Field Dallas . for some reason, I had a flash of Bennie Hill approaching a person with beautiful blond hair at a pub only to find out it was the old man that was a regular on his show.

she is very sensually dressed

Very nice work on this fantastic image! Most excellent presentation!

A wonderwoman superbly designed and set in this urban environment. She rocks ! I had forgotten a bit about Van Morrison, but he was rather popular in France back then. Many thanks for sharing this awesome composition, Dag ! 👨

Mother Of Nature - Mother Of Magic